This July, after seven days of packing, six round trips, four flights of stairs…and a monsoon later, we officially moved into our new apartment — as a couple. 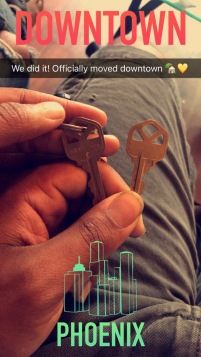 We traded in our cozy nest on the *west siiiiiiide* for the buzzing heart of downtown Phoenix. I can’t believe that it’s already been almost 6 months.

If you’ve made it this far without strangling him, choking him, or clipping off his grapes (if you know what I mean), then congratulations! You two have passed one of many tests as a couple.

75 things you learn when you move in with your boyfriend

Before we dive in, let me tell you somethi–

Yo Taylor, I’m really happy for you, Imma let you finish but Beyonce had one of the best videos of all time!

…as I was saying before we get to the good stuff, it’s helpful to get a quick idea of my situation before the big move — so you know, that I know, what I’m talking about.

Okay. So now you know I’m a legit boyfriend-move-in expert. Here we go.

04. If you ask how you look in that dress, you’ll get an honest opinion.

05. You realize that he has some really weird habits.

07. You have a memorized response to the “what’s next” interrogation from your family.

08. You have two completely different ideas of what it means to “separate” laundry.

09. He has three stages of dirtiness of this said laundry.

11. So naturally, you become a professional door slammer.

13. Eventually, you learn to pick your battles.

14. You may unlock the level of comfort where you go you-know-what with the door open.

15. No matter how much time you spend at home with him, you still miss him when he’s gone.

16. He will have no shame telling you which of your chick flicks that he hates.

17. And he’ll never admit when he likes one of them.

18. You look forward to coming home and looking ugly together.

19. You learn to appreciate the little things.

20. You start to sound like the old married couple when you choose sleep over sex.

22. Grocery shopping is either a chore or an adventure — there’s literally no in between.

24. “Babe, you wore that shirt yesterday…and the day before that.”

26. You learn to sleep through the thunder and lightning — I mean, his snoring.

28. Just because you made it with love doesn’t mean that it’ll taste good. It’s the thought that counts.

32. Your parents will care that you live together. His won’t.

33. You know EXACTLY where his buttons are. Push them or don’t. You decide. Just know that you’ll be waking up to him in the morning.

34. He’s going to use your body wash so make sure that it smells delicious.

35. His razor works waaaaay better than yours.

36. You don’t feel pressure to shave all the time.

37. Farting becomes hilarious, for both of you.

38. But you have a can of air freshener handy when he takes things a little too far.

39. He no longer bugs you about how long you take to get ready because he’s already figured out how to pass the time.

40. Falling asleep together on the couch counts as date night.

41. You know exactly which snacks to stash so he doesn’t take the last one.

43. You will eat protein with literally every meal. I repeat. Every. Single. One.

45. You do stuff that you have no idea that’s annoying.

48. You accidentally use his toothbrush.

49. His deodorant smells better than yours.

50. You have no shame leaving your not-so-sexy-but-totally-necessary things in plain sight.

51. You accummulate a TON of unneccessary shit.

55. Splitting the cost of things is ahhhhhmazing.

56. But buying for two kinda sucks.

57. You learn to participate in his weird interests.

59. You have at least one junk drawer.

60. No matter how clean he thinks the toilet is, it will never be as clean as if you’d done it yourself.

61. You realize that you’re a team. Which means sometimes you have to give more than just 50%.

63. Talking about money starts to feel a little less awkward.

64. Watching an episode without him is the equivalent of cheating on him.

69. He doesn’t really give a crap about the expensive vase on the coffee table.

71. And he suddenly feels like he went to med school when you’re sick.

72. He will never understand why you have so much shit on the bathroom sink.

73. He’ll ask you about your day but he’ll only listen for the first 2 minutes.

74. His friends become your friends.

75. Staying at home becomes almost as fun as going out.

But most importantly: You’ll realize that you have a built-in best friend to do life with.

What are some things that you learned when you moved in with bae? Drop them in the comments!